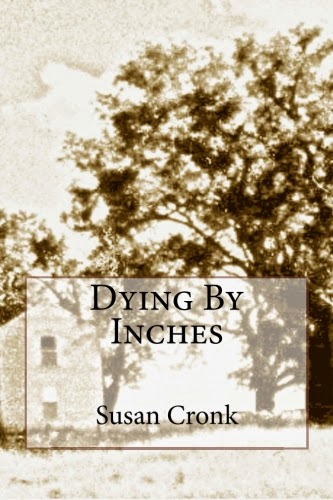 It is available on Amazon.com or on my CreateSpace e-store.

Dying By Inches is my latest book. It was recently released, following the passing of the real "Maggie." The book is based on true-life events. I have tried to stay true to Maggie's perspective. Names have been changed. Minor characters have been added to help the story along, and a few people who were present when the events took place have been omitted as they played no direct role.

The real "Maggie" lived to the age of 103. She had a varied and interesting life. My interviews with her between 2007 and 2014 were, to say the least, fascinating. They offer snippets of local history and record the life of a woman who, at a very young age, suffered abuse yet refused to let it define who she was to become over the following nine decades.

I am grateful to "Maggie" for sharing her stories with me. While I am not the first person she told them to, to my knowledge I am the first person to record them in audio and typewritten form. Maggie was a tenacious woman, at times abrupt, but she had a generosity of spirit that was as determined as she was. She will be greatly missed.