The End Of Things At Dark Island 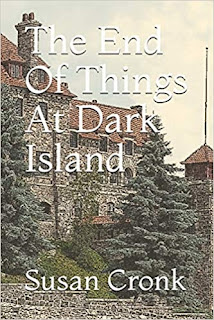 In 1906, the Nolan family, owners of The Towers on Dark Island in the Thousand Islands area in western New York, spanning the border of the United States and Canada, were throwing a party. Two hundred guests, members of some of the most influential and wealthiest families in New York and Pennsylvania were to attend, and several would be staying the entire weekend. They were happy to help the family officially open the summer season in the beautiful St. Lawrence area. What the neither the Nolans or their guests could know, until it was too late, was that there was someone among them who had plans to turn the celebratory weekend upside down.

Completed only two years earlier, the 'hunting lodge,' as Mr. Nolan called it, sat on a large island with numerous trees, a tennis court, a rose garden, two boat houses, a neighboring island on which vegetables were grown in season, and a two-story ice house. The Towers, the castle itself, was the pride of Mr. Nolan and his architect, who had designed it with secret passages, a dungeon, and turrets, the tops of which were bright red and easily seen for some distance along the river. It also had a clock tower with Westminster chimes that rang out the quarter hour in beautiful tones.

On the day of the party, Mr. Nolan arrived at Redwood, New York via train, with his wife, their six children, their butler Fitzhugh and his nephew Leigh. They had traveled from the family's country estate in eastern New York, traveling to the great city itself and transferring to a private Pullman car for the final leg of the journey to Redwood. There they were met by First Footman Markus, Charles, the motorman, and a boy they had never met before, Joe Mantry, who was, only that morning, designated as castle porter.

Two days before the family's arrival, young Joe Mantry, eight years old, and his father, Wedge Mantry, arrived on Dark Island. Wedge was a jack-of-all trades, and highly valued by the island owners who themselves constructed castles on Millionaire Row, a stretch of islands on the American side of the river. Six months earlier Wedge's wife died and so his young son began traveling with him from island to island attending to the wiring, plumbing, heating, cooling, and repairs to the boats, and any other thing the owners could find to keep him busy. This would be his first journey to Dark Island.

Joe, a young boy with a vivid imagination, was eager to spend time on Dark Island. The castle was still very new and not much was known about it. Even the local folks in Hammond, New York, where he and his folks lived, could speculate as to its luxuries, and its secrets. A few staff, and the family, were the only ones to stay there after its completion, and with the exception of one cook and the first footman, the regular staff traveled with the family to their other estates. So, when Wedge was called to Dark Island to finish installing some fixtures, and to make repairs to the powerhouse so their party guests could enjoy electric lights, Joe was happy to go along in the position of apprentice to his father. To sail aboard the fancy yachts and to roam the castle grounds, not to mention getting to know its hidden passages and its dungeon, was an adventure not to be missed.

In the wee hours of the morning following the party, a serious crime was committed, and the island owners were beside themselves with worry for their guests and socially embarrassed by the criminal's actions. The crime would endure as a black mark on Dark Island's reputation for the next forty-six years.

In 1952, Howard Mantry, Joe's son, assisted by one of his British cousins, Effie Portchester, traveled back to the Thousand Islands area, where he had spent time himself as a child, intent on solving the only crime Dark Island ever encountered. He wanted to put things right, and he enlisted Effie's help. He greatly admired her intellect and her adventurous nature, and as she was widowed the year before, he guessed she would eager for a chance to leave the carriage house she occupied near Portchester Castle in England.

Through chance, years earlier, Joe had come into some information when he was the area's favorite handyman, continuing the work among the islands that his father began. Joe left the information with his son, not knowing that Howard would become so engrossed by it all that it would set him, and Effie, off on a series of adventures to solve mysteries at more than one American castle. When Howard told her of his plans, Effie was eager to travel back to America with Howard and help him solve the crime, and to see some of the country Howard had spoken of to her and her husband Gordon so many years earlier.

The End Of Things At Dark Island story takes many twists and turns, somewhat like the castle passages and staircases. I hope you enjoy the stor.

FROM THE AUTHOR:
The End Of Things At Dark Island is the first in the Cozy American Castle Mysteries series that I hope, Lord willing, will be followed by a few more. This first novel was introduced as serialized fiction in December of 2018, and is due to be released in January of 2019 in both paperback and e-book formats.

In keeping with the 'cozy mystery' style of books, this story contains no explicit language, graphic sex scenes, or graphic violence. It is written for adults, but may also be read by young adults and middle school children . . . anyone who likes a little adventure.