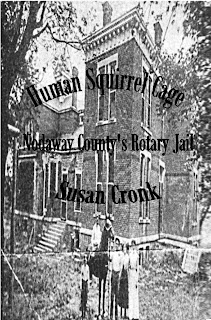 Update: 06/04/19 - IT IS PUBLISHED! - The Human Squirrel Cage: Nodaway County's Rotary Jail was published on June 4, 2019. It is available on Amazon, and available locally in Maryville, Missouri at the Nodaway News Leader office on East Third Street, or at the Nodaway County Historical Society Museum at 110 N. Walnut Street. The cost is $15.00.

Update: 06/06/17 - The book is still in progress. Some lately discovered information is being worked into the narrative, and I hope it will make for a more complete history of our jail's 103-year lifespan. I want to thank those who have been in touch lately with new leads and information, and who have shared memories of the old rotary jail.

Nodaway County's Human Squirrel Cage -- In December of 1882, Nodaway County, Missouri saw the completion of a new jail. It was called a "rotary jail" in the beginning, but later earned the moniker of "human squirrel cage," "lazy-Susan," or "merry-go-round," like the other 17 jails of similar design built in the Midwest and on the East Coast during that time. Among the prisoners, it was referred to as the "crowbar motel."

I had the good fortune to live in the Nodaway County Jail between 1977 and 1980, while my father was sheriff of Nodaway County. Our family became caretakers of the jail and its inmates. We took our responsibilities for both very seriously. They ate the same meals we did, and a few even commented that they ate better in jail than out. My grandmother cooked there the first two years of my father's term in office, but at her passing, my older brothers Scott and Darrel, as well as myself undertook preparation of the morning and evening meals. Noontime meals, usually sandwiches and chips, were premade and served by one of my father's deputies as we were at school during that time.

Nodaway County's rotary jail was certainly unique. In my essay, Jailhouse Family, published by Common Ties, an online ezine, I relate what it was like living in the old jail. The "condemned man's cell," which was more often used to house juvenile offenders, female inmates, or prisoners in transit from one prison or jail to another, was not used heavily. When empty, it became a quiet place for me to remove to with my Barbie dolls. I could play for long uninterrupted periods.

The old jailhouse had its legends, and it was not long after we moved in that we learned about its "haunted" nature. The stories, though mere fabrications by inmates for the purpose of frightening little children, gained an element of truth whenever the old boiler in the basement fired up, or the radiators rattled, or the wind blew the old window glass sitting loosely within the window panes.

In 1984, after an unsuccessful effort to save the old jail from demolition, it was torn down. Today, only three rotary jails remain in the Midwest. One is in Crawfordsville, Indiana, one is located in Pottawatomie County in Council Bluffs, Iowa, and the other is in Gallatin, Missouri. There were an estimated total of eighteen of these jails built during the early to late 1800s, and early half of the first decade of the 1900s. Seventeen of the jails have been verified as having existed. The location of the eighteenth jail remains unknown, if ever it existed at all.

The list of rotary jails in order of completion (Updated Sep 2017):
The first three jails constructed were:

Following were - not in order of construction - yet:


While they were believed to be unique in their design and patent in 1881, records show that another design very similar, called the "Panopticon" predated Haugh and Brown's patented rotary jail by 84 years, detailed by British philosopher Jeremy Bentham, who was writing about penitentiary management in 1787. It is believed that the U.S. architects may have drawn upon Bentham's original design, which had been put into use in some places in Europe. The Panopticon, however, was not designed to rotate. Rather, the jailer sat in a centralized viewing room with the cells lining the outside wall. The jailer then could, if he turned around in his station, see into every sell. The jailers viewing room did not rotate. There were jails built based upon the general idea of the Panopticon design.

In their original promotional materials and sales pitches, the rotary jails were hailed as being the safest and most escape-proof design of their time. This proved grossly untrue . . . more than once.

Many of the records related to the old Nodaway County jail are proving difficult to find, but the search continues. Photos are being collected and many will be included in the book. I am appreciative of those who have shared photos they have taken over the years. I am planning to include a list of sheriff's, and any available photos of them, on a set of tribute pages in the book. I hope you will check back in the spring of 2017 to learn more about the release date for Human Squirrel Cage: Nodaway County's Rotary Jail.

My father, a former sheriff of Nodaway County, recently told me that another rotary jail existed in Kansas. I have never heard it mentioned before now. I am following up on that. If correct, that means there were at least nineteen built. (By Susan Cronk 11/26/2016)

Follow-up information on the story shared below, the prisoner's name was Charles Fry. The incident occurred on June 28, 1904. His head was crushed, not severed. He lived for twelve hours following the incident, taken to a room at Reams' up on the square, where his family was called in to be with him. He was in jail for the illegal sale of alcohol in Hopkins. His release was denied because he failed to raise $400 more toward his $2,500 bail amount. (By Susan Cronk 11/05/2016)

One of the haunting stories passed down by the inmates related to one that had his head cut off as the inside tier of the jail was rotated past the keyhole opening. We were told that the other inmates held the prisoner's head in the closing gap until he was decapitated. Based on the design of the jail, this would have been impossible. A prisoner did die that way, however. in about 1904. Janet Hawley, a researcher and author in this area, shared the information about the incident, which was in the newspaper. Apparently, the prisoner had his cot or bunk pushed up close to the opening between the wedge-shaped cell and the opening and was asleep, with his head toward the opening. When the jailer rotated the cell block to access another cell, the inmate's head was taken off. I hope to be able to share that news account in more detail soon. (By Susan Cronk 08/17/2015)

Attention: The following photographs are used with permission of the copyright holder Joan (Houston) Schneider of Maryville. They may not be republished, reprinted, or reused in any other media form without her prior written consent.